Bid protests—especially at the U.S. Government Accountability Office (GAO)—have strict deadlines, so time is always of the essence. If your company submitted a proposal in response to a government solicitation and it was recently rejected, you may have grounds for a bid protest. You must often undertake this legal action within a matter of days from the time of the award announcement. Our experienced attorneys in Washington, D.C. can guide you through the process.

The attorneys at Ward & Berry PLLC have the experience and knowledge to help you file a successful claim though the GAO, Federal Court, or at the agency level.

Why Do You Need a Bid Protest Attorney?

A bid protest is a challenge to the award or proposed award of a contract for the procurement of services or goods. Additionally, it may also challenge the terms of solicitation for a procurement contract. Bid protests in Washington, D.C. can be challenging to win, and can be filed in various forums, which is why it is important to have an experienced attorney on your side to help you navigate the legal process.

Knowing which bid protest forum is best-suited to the particular needs of each case and client comes with years of experience in bid protests. In addition to building your company’s strongest case, we’ll make sure the battle is fought in the most advantageous arena for the best possible outcome. Our combined 65+ years of experience across many agencies and across all available forums allow Ward & Berry to quickly provide the pros and cons of each forum when making your selection.

Agency-level protests can be an extremely cost-effective way for a contractor to protest the award of a government contract. Contractors who are considering filing an agency-level bid protest should contact experienced counsel who will know how to best represent their interests before the various federal agencies. Whether you wish to file a bid protest against a competitor’s unfair, erroneous, or misrepresented contract bid, or defending a bid protest against competitor seeking to overturn your hard fought contract award, Ward & Berry stands ready to help.

GAO protests offer several benefits including an automatic stay of contract performance under the Competition in Contracting Act (CICA). Contractors who are considering filing a GAO bid protest should contact experienced counsel who will know how to best represent your interests before the GAO. Whether you wish to file a bid protest, or are defending against a bid protest and need to protect your award or your sensitive proprietary information, Ward & Berry stands ready to help.

Bid Protests at the Court of Federal Claims (COFC)

The Court of Federal Claims is a more challenging forum with complicated procedures and rules akin to those of other federal courts. Clients who find themselves battling in the COFC are even more in need of experienced, tenacious counsel. Contractors considering filing a bid protest at the COFC should contact veteran counsel who are admitted to practice before the COFC. Ward & Berry stands ready to help.

When do I need to file my protest?

The answer depends on the type of bid protest and the forum in which you file. For pre-award protests, the deadline is the same regardless of forum: you must file your pre-award bid protest any time prior to the deadline for receipt of proposals. After that deadline has passed, you lose your right to challenge the terms of the solicitation except in the instance of a latent ambiguity.

At the Court of Federal Claims, the deadline for a post-award bid protest is governed by the doctrine of laches which is essentially a test to determine whether the amount of time it took to file the protest was reasonable. We recommend filing your COFC bid protest no more than three weeks after notice of award.

Regardless of the circumstances or the type of protest you are contemplating, it is to your benefit to contact your attorneys as soon as possible.

Will I be able to see the awardee’s proposal?

How long does it take to resolve a bid protest?

The timing depends on the type of protest you decide to pursue. There is no legal requirement on the timing to decide an agency-level protest, although providing a decision within 35 days is recommended by federal regulations. GAO must decide a protest within 100 calendar days of filing, and the GAO almost never misses that requirement. The COFC rules encourage a quick resolution, and the COFC judges will usually resolve a protest within approximately three months of filing, if not sooner. However, the COFC also does not have a strict timing requirement and protests at the COFC often take longer, especially if they are complex.

What are my chances of success?

The chance of success for an agency-level protest is usually low. Based on our experience, the odds of success at the Court of Federal Claims or the GAO are significantly higher. However, certain protests may have benefits to proceed at the agency level depending on the facts of your case.

The GAO publishes its statistics annually. For fiscal year 2020, GAO announced the highest “effectiveness rate” ever: 51%. GAO defines an effectiveness rate as “[b]ased on a protester obtaining some form of relief from the agency, as reported to GAO, either as a result of voluntary agency corrective action or our Office sustaining the protest. This figure is a percentage of all protests closed this fiscal year.” So, if you file your protest at GAO, it is slightly more likely than not that you will get some sort of relief. This relief includes a re-evaluation of the proposals, including the protester’s proposal.

What are examples of “voluntary agency corrective action”?

There are any number of corrective actions an agency may take, including: amending the solicitation, ordering a re-evaluation of proposals, asking for new amended proposals, or starting the procurement process all over. If the agency undertakes corrective action prior to a decision from the GAO, the GAO will typically dismiss the case.

If I am the awardee and someone protests my award, how can I protect my award?

As the awardee of a federal contract, you are permitted to participate in a GAO or COFC protest of your award. You or your counsel can provide whatever assistance you can to aid the agency in defending your award. You or your attorneys can file separate written defenses on the same schedule as the protester at GAO or as the government at the COFC. Because the government may not adequately protect your interests, we recommend retaining attorneys and intervening in these cases. It is also important to intervene in a bid protest to ensure that your proprietary information is protected.

If I lose my protest at the GAO, can I appeal?

There is no right of appeal from a GAO decision. A protester that loses at GAO can refile that same protest at the U.S. Court of Federal Claims. The COFC will review the protest with fresh eyes. The COFC will usually consider the GAO opinion as advisory, but the GAO’s opinion will not be binding on the COFC. There are several examples of cases where a protester lost at GAO but later prevailed at the COFC.

These are just some of the questions that we get from clients who are contemplating pursuing some type of bid protest. Please do not hesitate to contact us if you are interested in engaging experienced bid protest lawyers. We have 65+ years of experience in representing federal contractors and handling bid protest matters and have litigated hundreds of cases.

Contact our bid protests attorneys in Washington, D.C. If you need help with a protest, it is critical to contact an experienced attorney at Ward & Berry PLLC as soon as possible. We are here to help you. Call us today at (202) 331-8160 or click here for our contact page. 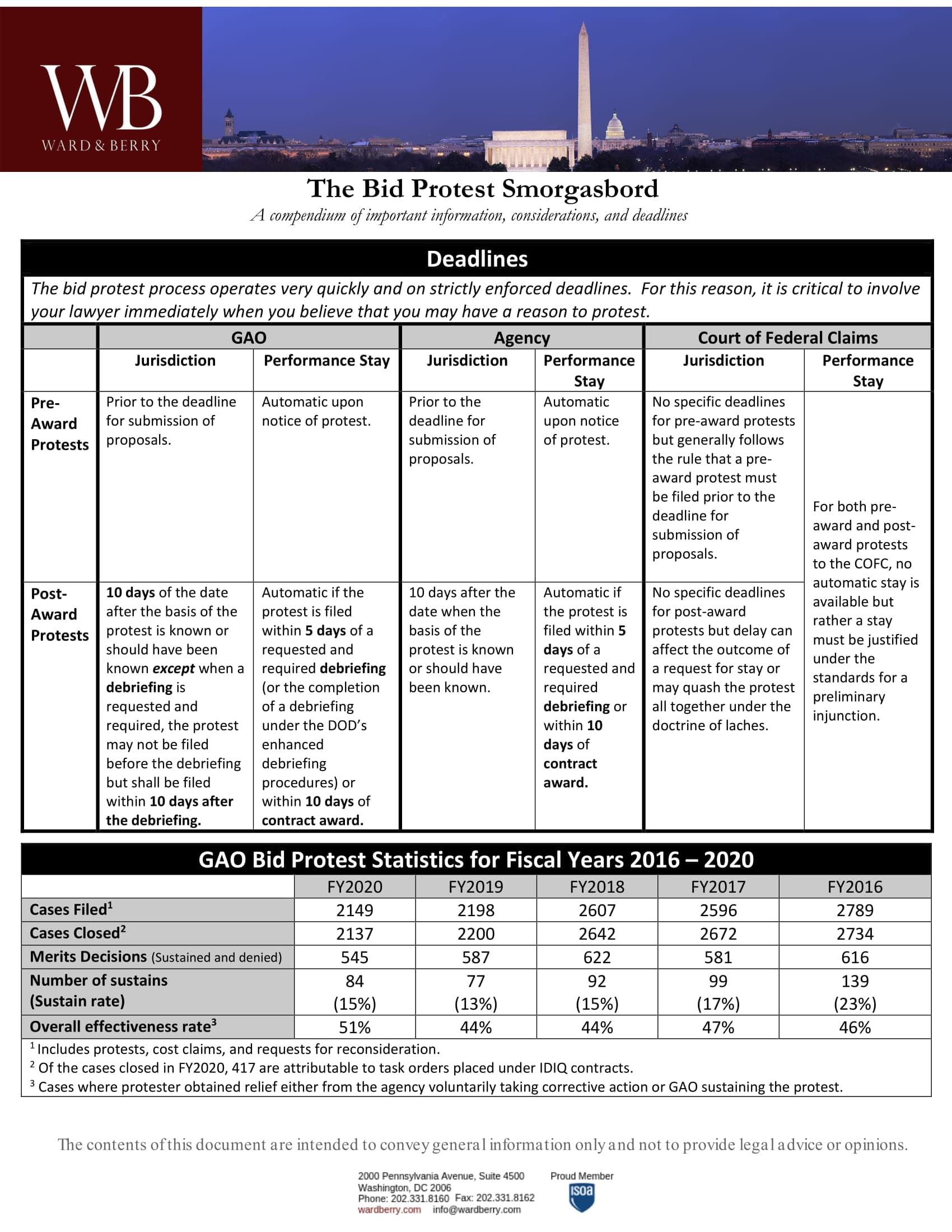 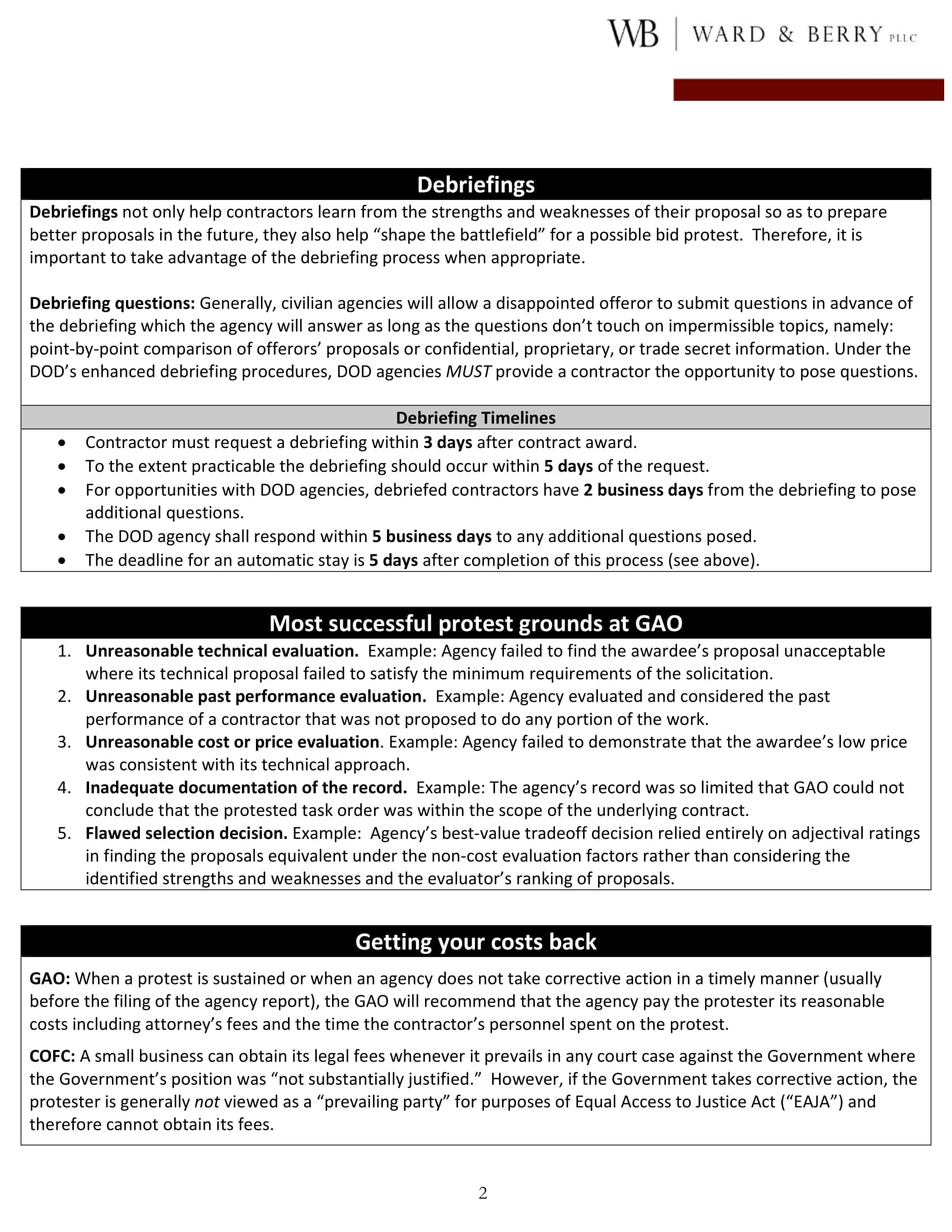